There's a template in ZapWorks Studio that accompanies this article called "360 Degree Panorama".

ZapWorks Studio supports using a device's gyroscope (and other sensors) for building experiences that can be looked around by rotating the phone. The functionality can be used for creating targetless augmented reality where content appears in the user's immediate environment, rendered on top of the camera view, or for creating virtual reality experiences that hide the camera view. 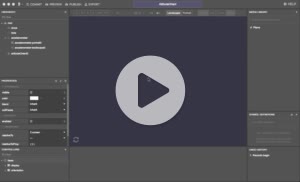 ZapWorks Studio provides a number of ways of simulating the gyroscope motions of a device in order to aid in the design of gyro experiences.

The arrow icon at the bottom left of the 3D view pans the view when clicked and held with the mouse - as if the user were rotating the device.

The globe icon on the toolbar above the 3D view hosts two options to help in the placement of content and preview:

Simulate ground displays a grid at a position of y = -1.5 units in the group. Objects placed on this grid will appear to have a scale where one unit approximates one meter in the real-world environment around the user.

Simulate sphere displays a sphere with regular lines of latitude and longitude marked. 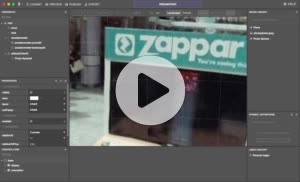 When an AttitudeOrient node is added to the Hierarchy its relativeTo property is automatically set to Z.camera. This ensures that the node is centered on the screen and has the same focal length as that of the device's camera.

Sometimes it's desirable to have a different focal length - to give the gyro-oriented environment a less or more "zoomed-in" appearance. This can be done in the following way:

The gyroscope environment support works particularly well with 360 "photo sphere" panoramas. These are fully immersive photos that can be acquired in a number of ways:

A template for new projects "360 Degree Panorama" makes it simple to build an experience using one of these images. The rest of this section describes how such an experience is built from scratch. 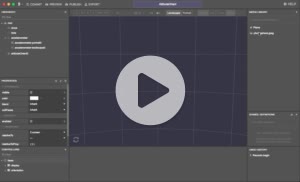 As the video on the right demonstrates, adding a photo sphere object inside an AttitudeOrient node, then setting the material to a photo sphere image, is all that is necessary to create a full 360 degree panorama effect.