You can download a selection of animated models from the Animated Characters section of our 3D Model Library.

Animations defined during the import of a model (or post-import from the Properties window) are created as timelines within the 3D model's symbol, under the animations controller.

The default full timeline contains all exported animations in a single timeline. Its length is calculated as:

Timelines can be accessed from an instance of the model's symbol within a parent symbol through the Animations reference in the node's Properties panel.

All timeline animations present in the model's symbol are listed in the drop-down menu, with the value on the right denoting the selected animation's current position along its individual timeline.

Setting up a Timeline in the parent symbol

Animations defined within a 3D model's symbol can be accessed from a parent symbol in which it has been instantiated.

The following steps are shown in the video below.

Once a timeline has been set up within the parent symbol it can be played either by using Actions or from a script.

Playing a Timeline from the parent symbol

Add an action to a node by clicking + Add from its Actions property in the Properties panel.

Select the event you'd like to trigger the animation and choose the > Play Timeline option.

The dropdown menu on the left lists all controllers in the current symbol, with the dropdown on the right listing all timelines within the selected controller.

The From start option sets the timeline to play from the start each time the chosen event is triggered.

The Loop option sets whether the animation should loop when playing.

Alternatively, if a timeline variable has already been created within a script the play() function can be called directly from the variable. 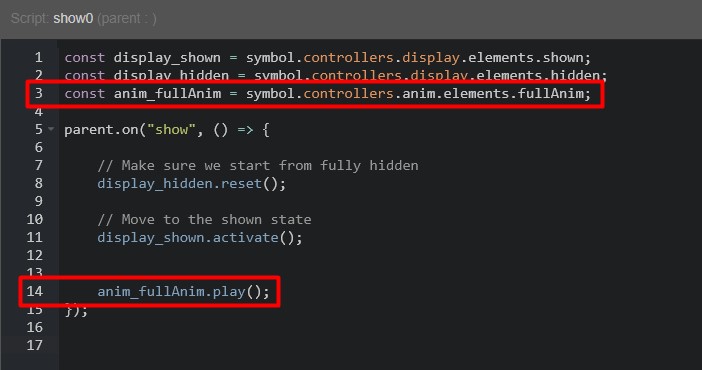 The speed parameter sets the rate at which the timeline will play (a negative value will play the timeline in reverse), and loop sets whether the timeline should loop once it has finished playing, with a boolean value (true/false).

Using the example timeline variable in the script above, these optional parameters can be passed in to the play function:

You can find a list of the functions provided, and events emitted, by the Z.Timeline object here.