Video in the 3D View 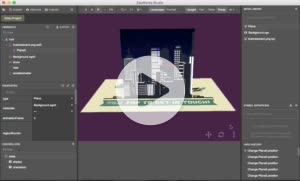 Example of video in the 3D view

Video in the 3D view is video set as the material or skin of plane nodes or other objects. It maps to the object and gives the appearance of existing in 3D space. An example of this can be seen in the video to the right.

Getting Video in the 3D View

The first step towards getting video into the 3D view is to import a video file into the Media Library. The following formats are supported for this purpose:

For technical reasons the video resolution of OGV videos must be a power of two in both dimensions, e.g. 128px, 256px etc. Due to limitations of mobile hardware it's recommended to keep video used as a texture to 256px by 256px or less. 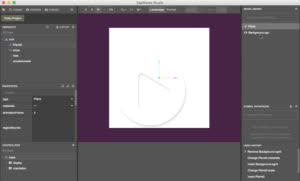 Setting a VideoTexture as a material

Next, drag the video into the Hierarchy to create a VideoTexture node with the video as the source material.

With an existing plane in the Hierarchy selected, locate the materials property in the Properties panel and set it to the newly-created VideoTexture. This will cause the first frame of the video will appear on the plane.

MP4 video will show a generic preview on the plane.

The example below shows the relevant code within the show script node.

In the example above myVideo_ogv is the name of the VideoTexture node in the Hierarchy, this may differ in your project.

As with audio, VideoTexture nodes can be controlled from both timelines and scripts.

As audio is not supported in OGV videos imported into Studio, you will need to separately import and play your audio file. For more information on audio please see our Audio and Video article.

When an experience is scanned, MP4 videos instanced in the project's Hierarchy are loaded onto the user's device. Due to differences in hardware and OS capabilities some devices limit the number of videos that can be loaded at once.

Due to this limitation, we recommend keeping the number of video nodes in your Hierarchy to a minimum. If your experience makes use of multiple videos consider reusing existing video nodes and changing their source property instead.

To load a video file in the Media Library into a video node from within a script, follow these steps:

Using this method it's possible to have a single video node in the Hierarchy and dynamically update the attached video file throughout the experience.